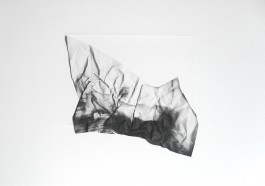 Limited edition made for the AMBruno Stills project, in which prints were developed in response to the notion of an instant of a film stilled, this may be based on production/publicity photos or a captured frame, or perhaps a memory of a film seen or of an imagined one.

The work by Sophie Loss, Factum no.24, is a combination of digital print and embossing. The image of a crumpled sheet of paper lies printed on the surface of the supporting paper, including the shadow cast by its irregular edge. This representation comprises of the intricate network of shadows and highlights defining the creases and folds of the crushed sheet and also, intermingled with these, the diffuse shadows of an image previously printed on this surface; though difficult to resolve, this scene, in black and white, appears to be that of a room.

A rectangular line embossed into the paper runs partially around the image, from the pointed top left corner down that side then after an angle under the print and horizontally across the top and down the right side. The artist states, “In Jean-Luc Godard’s film Les Carabiniers a cinema spectator attempts to touch the projected image, only to pull down the screen - both the screen and the paper are sites of collapsed illusion”.

The two soldiers in Godard’s film are duped by their inability to differentiate between the world and its representations - they are delighted with their spoils of war, their hoard of picture-postcards.

The printed image is extracted from a sequence in Les Carabiniers set in a cinema (visited by one of the mercenaries) at which another film is being shown which comprises of the embedded narrative of a woman taking a bath. This image depicts the moment of the screen’s and the vision’s disintegration, this is in turn crumpled and then re-presented, establishing yet another semblance of reality.

The reproduced folds and shadows reflexively allude to the multiple layers of imposed and exposed simulacra, a mise en abyme of superficial projections. Whereas the substance of the three-dimensional material form of the crumpled paper is an illusionistic representation, the now vacant site of the screen and of its disrupted projection is rendered physically in the form of the embossed frame

Extract from The time of reading: artists’ books and self-reflexive practices in literature John McDowall, 2018.